Back in May, Craig Mundie, Senior Vice President with Microsoft, gave a speech at NYU's Stern School of Business that announced the terms by which Microsoft was cracking open -- barely -- its source code. He called the company's new licensing model "shared source." (I just wrote "scared source" by mistake, which tells you where my mind is going.)

The fact that Microsoft would start rapping about any kind of source code, and modify it with a fresh new euphemism -- shared -- caused immediate tissue rejection in the hacker cultural body. Leading hackers so certain of their own Truth that they refuse to appear on each other's t-shirts were suddenly gathered around their collective keyboards to craft a single response that would say, in polite terms, "Embrace and extend this, dude."

We urge Microsoft to go the rest of the way in embracing the Open Source software development paradigm. Stop asking for one-way sharing, and accept the responsibility to share and share alike that comes with the benefits of Open Source. Acknowledge that it is compatible with business.

Free Software is a great way to build a common foundation of software that encourages innovation and fair competition. Microsoft, it's time for you to join us.

Mundie responded with a piece in CNET that framed his argument in terms of economics, manufacture and the PC's popularity:

... this is more than just an academic debate. The commercial software industry is a significant driver of our global economy. It employs 1.35 million people and produces $175 billion in worldwide revenues annually (sources: BSA, IDC).

The business model for commercial software has a proven track record and is a key engine of economic growth for many countries. It has boosted productivity and efficiency in almost every sector of the economy, as businesses and individuals have enjoyed the wealth of tools, information and other activities made possible in the PC era.

Then he took on the GPL -- the Free Software Foundation's General Public License:

In my speech, I did not question the right of the open-source software model to compete in the marketplace. The issue at hand is choice; companies and individuals should be able to choose either model, and we support this right. I did call out what I believe is a real problem in the licensing model that many open-source software products employ: the General Public License.

The GPL turns our existing concepts of intellectual property rights on their heads. Some of the tension I see between the GPL and strong business models is by design, and some of it is caused simply because there remains a high level of legal uncertainty around the GPL-- uncertainty that translates into business risk.

In my opinion, the GPL is intended to build a strong software community at the expense of a strong commercial software business model. That's why Linus Torvalds said last week that "Linux is never really going to be a rich sell."

This isn't to say that some companies won't find a business plan that can make money releasing products under the GPL. We have yet to see such companies emerge, but perhaps some will.

What is at issue with the GPL? In a nutshell, it debases the currency of the ideas and labor that transform great ideas into great products.

It would be easy to dismiss all this as provocation in the voice of boilerplate -- or worse, as what one überhacker called "a declaration of war on our culture." But neither of those responses are useful to folks caught in the middle -- the IT professionals this column calls "suits."

As it happened Eric Raymond and I were both guests on the May 14 broadcast of The Linux Show. When conversation came around to the reasoning behind open source rhetoric, Eric said, "We used the term open source not to piss off the FSF folks, but to claim a semantic space where we could talk about issues without scaring away the people whose beliefs we wanted to change."

This has been an extremely successful strategy. Even if IT folks don't agree about what "open source" means, it's still a popular topic. Everybody who talks about open source inhabits its semantic space. But conversing is not believing. Remember Eric's last seven words. These are still people whose beliefs we want to change.

Changing other people's beliefs isn't like changing your shoes. It's like changing other people's shoes. There's a lot of convincing to do. Even if the other guy's shoes are ugly and uncomfortable, at least they're familiar. And in this case, familiar doesn't cover it. In the IT world, Microsoft platforms, software and tools are the prevailing environment. Of course, we used to say the same thing about IBM. Things do change.

Did anything change when Craig Mundie tried to embrace and extend the conversation about source code? I think so. Mundie's response to Bruce's letter looked like a poker move to me. He said "we'll see your source and raise you one shared". What was our response? As a unit, nothing. the Beowulf Cluster broke up over the usual disagreemnets. It wasn't pretty.

Perhaps it's just as well. Two of the original signers told me they felt the letter was skewed "from the pragmatic to the ideological." If so, Mundie read the letter well, because the ideology is exactly what his response attacked.

When this kind of thing happens, is the right choice to attack back?

We need to be careful here. When Microsoft decided to release a free browser, Marc Andreessen said "In a fight between a bear and an alligator, what determines the victor is the terrain. What Microsoft just did was move into our terrain." He also called the operating system "just a device driver." Today Microsoft is wearing alligator shoes.

And now the bear sits in our semantic space, talking business trash. 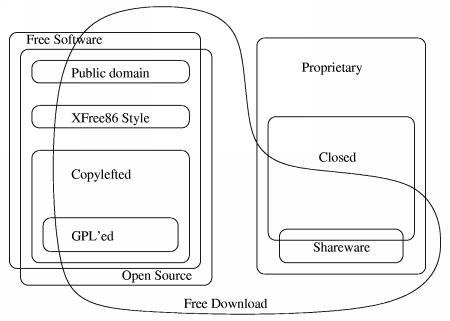 You might recall what I wrote exactly a year ago, when every mainstream publication was running stories about how the feds were going to break up Microsoft. I said Microsoft was going to beat the rap by baiting Judge Jackson, giving the company a winnable case in Appeals Court that it lacked in Judge Jackson's.

So: are they baiting us here? You betcha. But the appeals court in this case is the whole IT community that remains Microsoft's customer base.

What they want us to do is defend the incomprehensible: namely, all the stuff we can't stop arguing about.

The tactical picture becomes clear when you look at this diagram from the Free Software Foundation's philosophy page. From the perspective of both Microsoft and its customers, the one thing that's easy to understand is in the upper right. By aiming insults at the GPL in the lower left, they rally everybody in the Free/Open communities to defend what those outside those communities have the most trouble understanding: the FSF's belief that owning software is a Bad Thing.

If we defend that position, or respond by using "proprietary" as an epithet, we'll lose. "It takes two to tango," one commercial developer wrote to me in the midst of all this. "If Microsoft ever chose an enemy who was willing to share the cursor, they would finally have met their match. It hasn't happened yet. Your friends are still saying 'It's All About Us' which is complete bullshit. They never talk about anyone but Microsoft and themselves."

Which is why we need to embrace and extend the most precious thing that Microsoft has and we don't, which is customers. Why? Because it's their hearts and minds we need to win, and Microsoft is busy ignoring them.

Look back at Mundie's text. Note that his point of view is located not with customers, but with the commercial software industry. Big difference. Yes, commercial software companies do face a choice among many different business models and licensing schemes, including the GPL. But this argument isn't just about business models. It is not the exclusive concern of Supply. It's also about Demand. In some ways the real argument isn't between Supply and Supply: one "shared" and one "open". It's between Supply and Demand.

On the demand side, customers are using software of many different types, from many different sources. Whether they know it or not, most large enterprises are already full of applications and development tools from the free software and open source communities. Are they choosing those "solutions" just because they like one party's source license or another party's business model? No. They're using it because it's available and practical.

We need to relocate our concerns to the demand side of markets. What is it that works, and why? Specifically, what "solutions" work for everybody? Our best example, our ace in the hole, isn't Linux alone. It's the Net, and all the free and open software that accounts for its ubiquity. Our communities created and proliferated that software because we know something about its nature that the Microsofts of the world do not.

The "licensing structures" Microsoft cares most about all rely on conceiving code as capital: as a manufactured good. Concepts like "intellectual property" are easy to understand and argue about as long as one continues to conceive of that property in material terms. But code is not material, and no amount of lawmaking or marketing can make it material.

The deepest fact in this matter is not that software wants to be free, but that code wants to be public. Meanwhile too many of our laws and business practices cannot comprehend this simple fact. It's too far below their immediate concerns. Like the core of the Earth, it's nice to have but too deep to appreciate.

The problem for Microsoft is that it lives in a world increasingly built with public code that oozes like lava out of the free and open ground below everybody. We're making a whole new world here, but we're doing it together. And that includes Microsoft, which in fact does contribute to common infrastructure. SOAP is a good example.

Indeed, much good has been produced by what Mundie calls the "commercial software model" or it wouldn't have customers. But the Net on which all of business increasingly relies is not a product of that model, even though business is certainly involved.

What free/open hackers know and Craig Mundie doesn't (yet), is that there is much to the nature of code that can neither be comprehended nor represented by the conceptual system Mundie employs -- not because it's insufficient in scope but rather because it's operating only at the commercial level. At a deeper level -- the nature of software itself -- the principles of business don't apply, for the same reason that the principles of mechanics don't apply to chemistry, even while mechanics depends on chemistry as a deeper principle. You'd rather make a clock out of iron than sodium.

Business needs more of that public infrastructure. It needs programs, operating systems, device drivers, file formats and protocols that everybody can use because nobody owns them. So do commercial developers and their customers: all of Supply and all of Demand. But those terms are too abstract. Think of the entire mess as a bazaar.

If we embrace the whole software bazaar, we can open hearts and extend minds. If we refuse to share the cursor, we cease to represent the bazaar. At that point the choice is between a cathedral and a cult.

Doc Searls is Senior Editor of Linux Journal and co-author of The Cluetrain Manifesto.